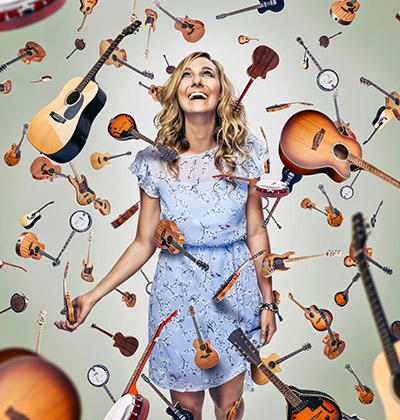 Life has been something of a whirlwind for the down to earth surfer chick from Guildford, since embarking on a solo career in 2012 and bursting onto the scene with her distinctively catchy pop melodies, fused with folk instrumentation and a touch of country. The increasing popularity of this uniquely versatile “what you see is what you get” artist is now undeniable, thanks to over three million Spotify plays, and over a million video views on the back of seven EP and three album releases, with four consecutive singles playlisted by BBC Radio 2.

Hailed as “Just Magical” by the late great Sir Terry Wogan, an early supporter of her music, Emma performed live sessions on his Weekend Wogan show three times. Embraced by the BBC Introducing initiative, she went on to perform to a crowd of 40,000 at the BBC’s Festival in a Day at Hyde Park.

Following the success of her first two singles, A Place Called You and Once, another BBC Radio 2 giant and enthusiastic supporter, Chris Evans, invited Emma to debut her next release, Riptide, on his Breakfast Show to 10 million listeners. The song went on to be an iTunes Single of the Week achieving over 200,000 downloads. During the show, Evans was so impressed that he invited Emma to play at CarFest the following week; an invitation he repeated two years later for performances at both CarFest North and South.

Emma describes her songs as, “all written from my heart and soul to convey beautiful messages based on feelings of loss, happiness, nature, my love for the ocean and my love for people”. From the thought provoking ballad Sunflower (a song written about the loss of her mum to cancer) to the barn-storming Riptide, the debut album Enchanted demonstrated an impressively mature talent.

Playing the majority of instruments herself, Emma admits she has “an absolute addiction to string instruments”, something that’s evident throughout her music weaving together guitar, banjo, mandolin, piano, cello and ukulele.

On the road, Emma is famous for taking time out to meet and talk with her fans after the show. “I love being on tour and engaging with my fans. It is the most amazing experience to see people touched by your music and have them tell you it makes a difference to their lives”. It’s an ethos carried across to her social-media too where she’s often to be found actively and personally engaging with fans on Twitter and Facebook.

Such is Emma’s vocal versatility that American country music singer Trace Adkins invited her to contribute to his Christmas album. Three tracks were recorded and included on the The King’s Gift. Closer to home, Emma collaborated with English folk-rock singer-songwriter Passenger on I’ll Be Your Man.

The collaboration with producer and co-writer Pete Woodroffe (known for producing Def Leppard, Melanie C and Simply Red) continued with the release of her follow-up album, Waves (and subsequent extended Deluxe Edition release the following year). “Pete’s an amazing producer and writer. When we first wrote together we just clicked, it really works. He’s very down-to-earth and has a knack of bringing out the best in me”.

The first single, Make My Day, was another BBC nationally and regionally playlisted track. “That was a difficult one to get right. We wrote it early in the sessions for Waves and although I was happy with the lyric and melody, something wasn’t quite right. Six months later we revisited it and with a new drum feel and the addition of a few electric guitar parts it all clicked into place exactly as I’d originally envisaged it”. 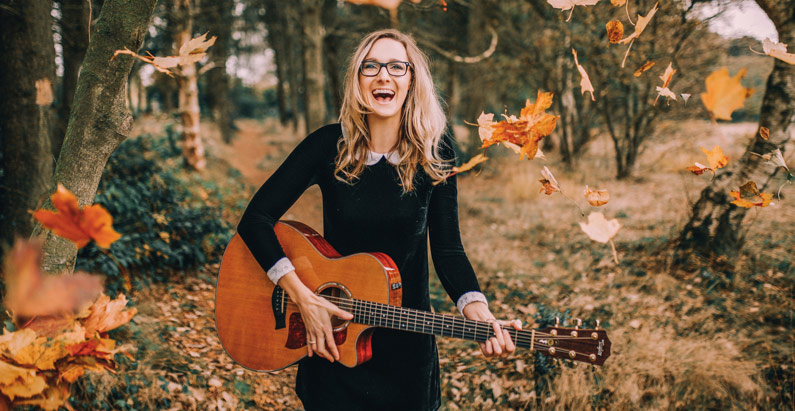 Even if you’d never heard of Emma Stevens, you would have almost certainly heard her music, with many songs used on numerous BBC, ITV, Sky and Channel 4 programmes, most recently on BBC 1’s The Apprentice. “It’s so wonderful to know that my music gets used on TV a lot. Usually a fan tweets me or sends me a Facebook message saying they’re listening to my song in the background of their favourite show and it never ceases to bring a smile to my face”.

Emma’s love of music was instilled in her from a very early age: “When I was about two I used to watch my Mum playing Spanish acoustic guitar and I completely gravitated towards it. I just loved music, my mum said I would come alive when I heard it”. Spotting this early talent, Emma’s parents sent her to cello and piano lessons from the age of six and she later joined the Surrey Youth Orchestra. “I started fantasising about performing and people singing my songs from when I was 12 or 13, that’s when I started writing”. But she freely admits that those early songs were “not very good!”

Enrolling at the Academy of Contemporary Music developed and solidified her songwriting and performance skills and initially led to session and tour work with bands including fiN, H-Boogie, The Kooks, Mona, Incubus and Feeder.

As a songwriter, Emma worked across multiple genres and collaborated with the likes of Sharon Vaughn, Russ Ballard, John Beck, Wayne Rodrigues and Charlie Midnight. “In those early days, I was totally out of my comfort zone, but I thrived on it and I loved not knowing what sort of song would come out of each co-write – I’d walk into an R&B session one minute, and then work on an bubblegum pop song the next”. An early, if unexpected, success was a song penned for a Korean boy-band that went on to sell 100,000 copies in a week.

But it was during songwriting sessions in L.A. with Charlie Midnight that Emma began to seriously consider a solo career. “He’d say, ‘You’ve got a real talent. You need to be writing for yourself as an artist’”.

In early 2012, losing her mum to cancer provided the impetus for Emma to seriously pursue a solo career: “When my mum got diagnosed it was a crazy whirlwind of hope and loss. She instilled so much positivity in me and made me realise you just have to live your life and be happy. She was always my biggest supporter and believer in me and would say ‘You’ve got the potential to do it yourself’ so I thought ‘Yeah, I’m going to do it!’”

Two weeks before her mother died, they sat down together and designed the artwork that would initially be used for the first four EPs and later, placed together to form the entire cover of the debut album Enchanted.

As an independent artist, running your own label, maintaining control of the creative process and owning your own publishing could be a daunting prospect, but not for Emma: “Even though I’m a DIY artist, I have an incredible team of people around me really helping me. I would not be able to do it on my own but I never really think about it as scary – I guess I think; ‘it is what it is’ and I’m really lucky to be doing it”.

Somehow, even with such a busy schedule, Emma still finds time to support charities close to her heart. From playing a 12-hour buskathon for Children in Need, a Tiger march around London and performing for the David Shepherd Wildlife Foundation, to collaborating with the Woodland Trust and Eden Project to get hundreds of trees planted in local communities: “As a long-time passionate supporter of the environment, one of my greatest ambitions is to help inspire and engage fans to care for nature”.

Emma’s third album, To My Roots, was collection of songs inspired by the eclectic mix of music she grew up listening to. Everything from James Taylor through Eric Clapton and Paul Simon to The Dixie Chicks and The Corrs. “I love country music and was lucky enough to spend a month in Nashville writing, collaborating and immersing myself in the culture”.

A collaboration with Kevin Jeremiah of The Feeling followed with the release of the EP Atoms in 2019.

You can find a full discography of Emma’s releases in the music section of the website.

Emma Stevens has a singular ability in her writing and singing to realize the pure heart and true intention of a lyric and melody. There is no artifice in her creativity, not in her hauntingly honest voice or melodic sensibility. Writing songs is so much of the time a collaborative enterprise and Emma, in our collaborations, has been as good as it gets: sensitive to the song and her song-writing partner.
Charlie Midnight, Grammy Award Winning Songwriter & Producer
…Emma’s ability to produce her signature sound on whichever instrument she chooses impresses me to no end. That coupled with the soft tone of her voice suggests a successful artist career and one with longevity is part of Emma’s destiny…
Ross Gautreau, A&R Polydor Records